The original gate, known as Porta San Giorgio, was designed by military engineer Francesco Laparelli de Carotona, and was erected between April 1566 and 1569. At that time it was just a rock-hewn passage.

It was replaced in 1632 by a more ornate gate designed by Maltese architect Tommaso Dingli, during the rule of Fra Antoine de Paule. Dingli’s design consisted of a central archway with a smaller arch at each side, and a wooden drawbridge across the deep, dry moat that lies immediately outside the walls of Valletta 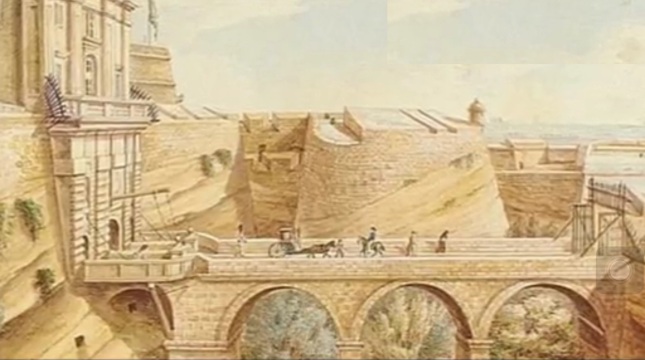 In 1853, at the height of British rule over Malta, a new gate designed by a certain Col. Thompson of the Royal Engineers was erected, consisting of two central arches with two smaller ones. Throughout the 19th and early 20th centuries, City Gate was known as Porta Reale, which became “Putirjal” in Maltese, and “Kingsway” in English. 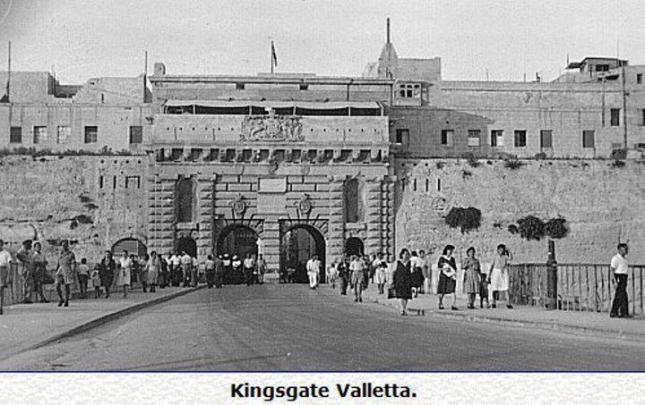 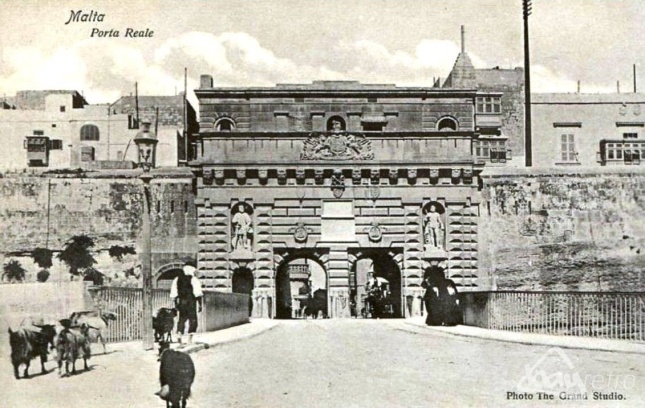 The fourth City Gate was inaugurated in 1964 and it was part of a project that never materialised, that of redeveloping the entrance to Valletta and the Royal Opera House. Its Italian modernism design was the source of much controversy. Recent years have witnessed growing public interest in the redevelopment of City Gate and the Royal Opera House, situated nearby. Italian architect Renzo Piano, and Maltese architect Richard England both submitted designs for a new City Gate, but the project stalled at the time due to poor public reaction. 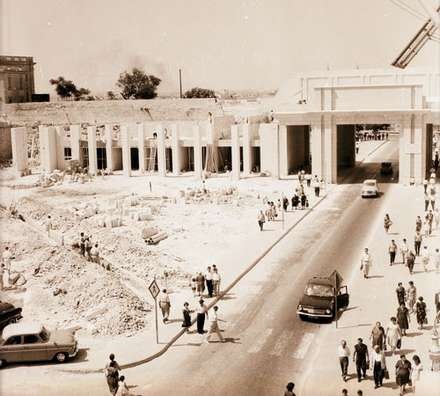 The present City Entrance is the fifth to have stood at the entrance to Valletta. In 2011 work started to a second design by Renzo Piano for the gate and surrounding area which have seen the area renovated. As part of that works the previous gate structure was demolished in May 2011.

On Thursday 29 August 2013 a graffiti of a man and a woman forming a heart with their hands and arms (see photo below) has been splashed on the new entrance to Valletta. A person was seen painting the  graffiti by police on patrol at 4am but the culprit ran off on seeing the police. The person has not been caught.

Work in February 2014 was progressing at a steady pace 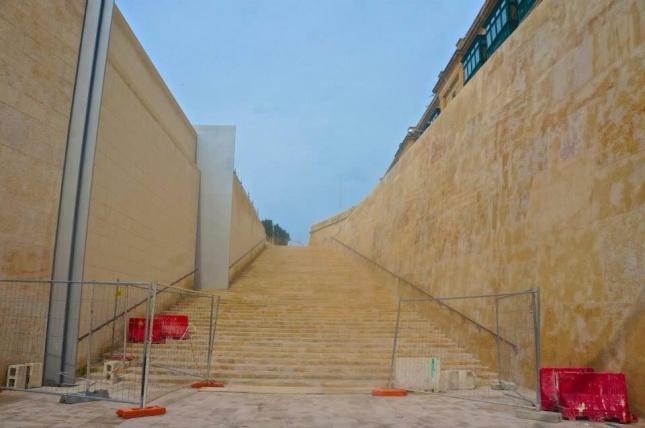 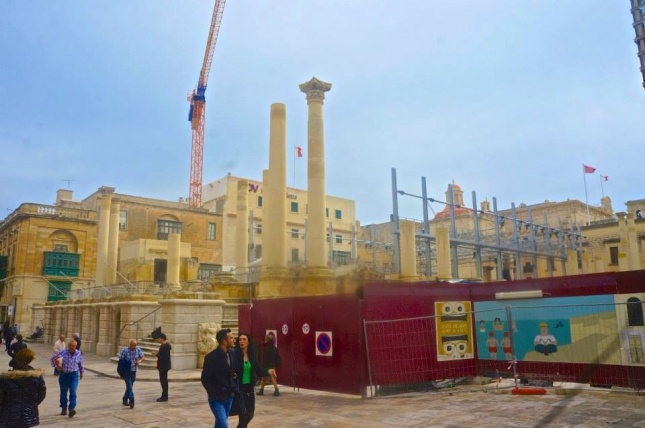 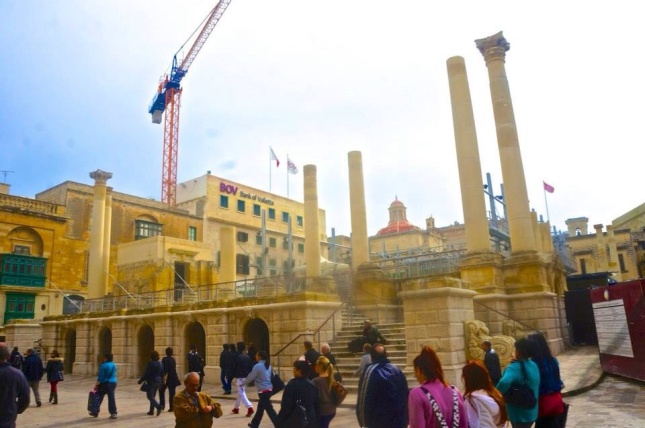 Valletta Entrance in May 2014 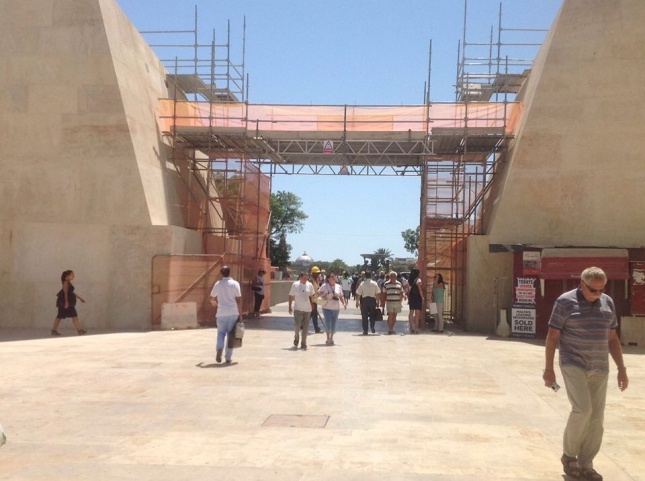 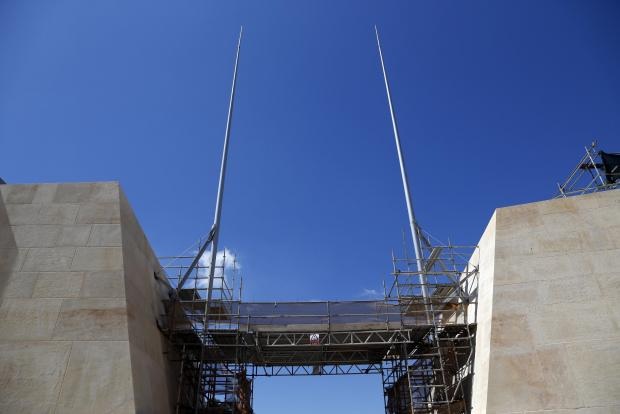 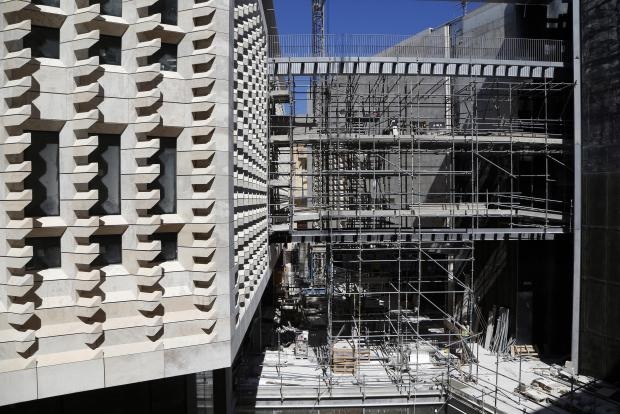 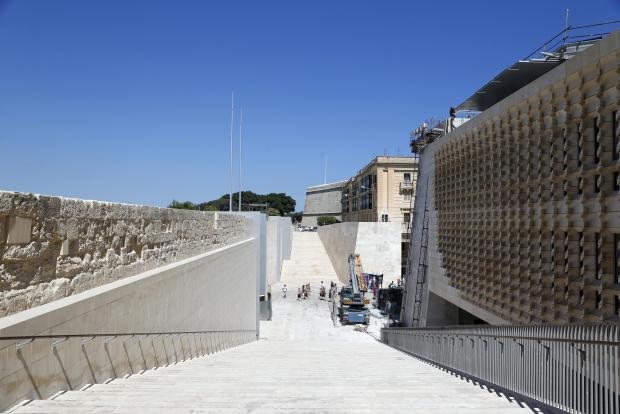 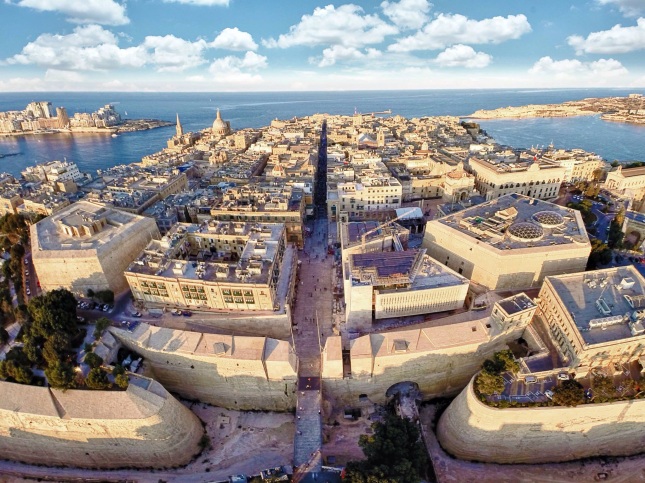 This gate replaced the old “Porta del Monte” (named after one of the Grand Masters), which had also been known as the “Porta Marina.” It was planned during the governship of Sir Arthur Borton, who laid the foundation stone in 1884. It was opened to the public in the following year. The wider arched entrances “provided a thoroughfare for carriages, riders and heavy traffic, whilst pedestrians used the smaller doors on each side”. The arched entrances are surmounted by the coats of arms of Malta and Valletta, whilst Britain’s provides  a very decorative frontispiece.

The architect was Emmanuel Luigi Galizia. 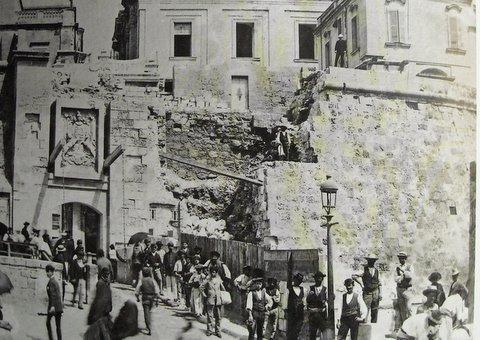 Another entrance to Valletta was the Marsamxett Gate.  In the early 1900’s it was demolished and replaced by an archway.  The photo below taken in 1902 gives a glimpse of the gate. 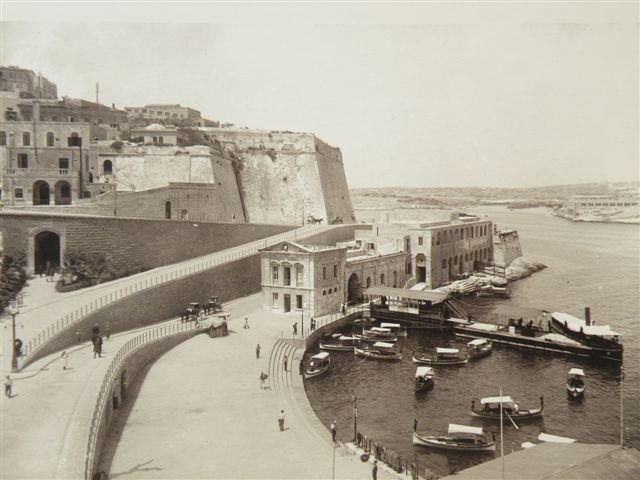 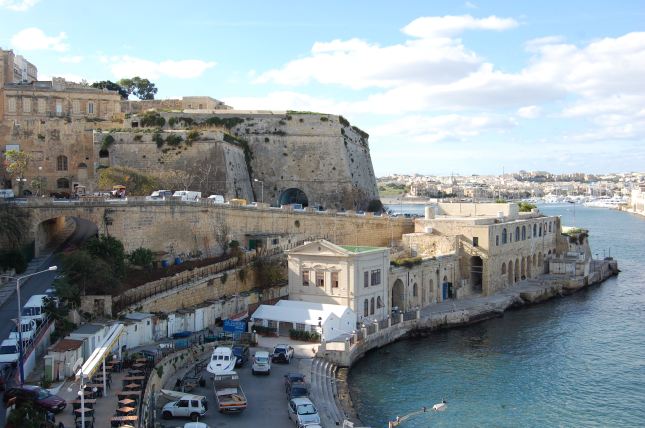