Brief history of the Maltese Pound

The foreign coins were finally removed from circulation in 1885 following a decree by the Italian government, which left only sterling coins circulating on the island for nearly a century until 1972. Although using British coinage, Malta did not decimalize its currency system in 1971 like Britain.

Although Malta’s currency was the Pound sterling, local official notes were issued denominated in pounds starting in 1914 due to concern over the first world war. This first series of notes was short lived being replaced by British treasury notes again in 1915 which circulated until 1949.

In 1949 Malta established a currency board and again began to issue notes. The Maltese pound was still pegged to the pound sterling and this parity was observed until the late 1970’s.

In 1968 the newly formed Central Bank of Malta took over the functions of the currency board and began to issue the national currency.

The name Lira, Maltese for pound was not used on banknotes until 1973 and on coins until 1986.

The ISO 4217 code for the Maltese Pound was MTL, locally prices were expressed using the pound sign (£) or Lm preceded the amount, i.e. Lm5,00.

The Maltese Pound. was the second most valuable currency in the world, Kuwait being ranked at number one.

In 2008 Malta adopted the euro as its national currency.

The issue of small denomination paper currency was necessitated by the scarcity of metal for coinage, and by the difficulty of shipping British currency to Malta during the war. With the war’s end, these small denomination notes became obsolete and fell into disuse, mainly because paper wore out too quickly, and they were again replaced by British coins which continued to circulate as legal tender up to 1972.

The notes issued in Malta during the Second World War were uniface (single faced) notes except for the 1/- note which represented an overprint on old stocks of the 1918 2/- note.  This was probably a wartime austerity measure applicable to note issues for the British colonial empire, as all other colonial note-issuing territories had similar uniface notes.  The Malta notes therefore formed part of the colonial omnibus issues. 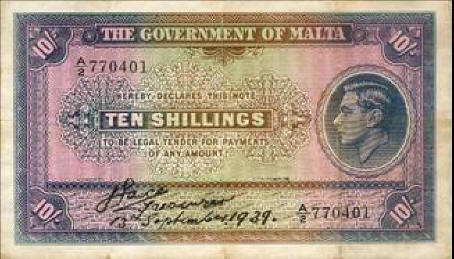 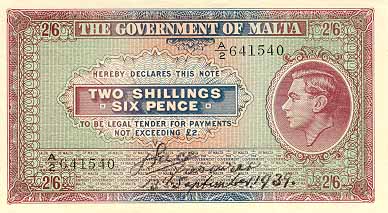 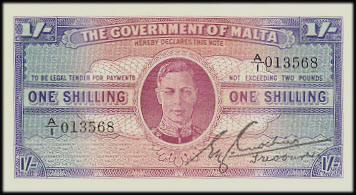 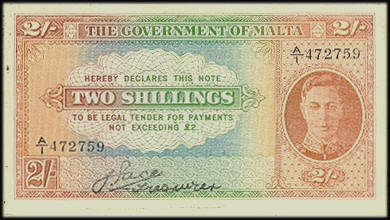 On 8 May 1951, new 10/- and £1 Maltese notes came into circulation. These came to be known as the ‘New’ series. Similar notes bearing Queen Elizabeth’s portrait were issued in April 1954 to commemorate Her Majesty’s visit to Malta.

On 2 June 1961 a £5 denomination note was issued for the first time, bearing the famous Annigoni portrait of HM The Queen. Two years later a 10/- and £1 note were issued on the same design, and these three came to be known as the ‘Pictorial’ series. 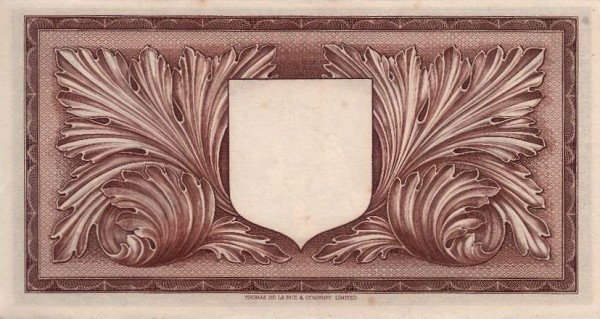 The Central Bank of Malta, which was established by the Central Bank Act of 1967 and began operating on 17 April 1968, took over the assets and liabilities of the Note Security Fund from the Currency Board in June 1968.  From that date responsibility for the issue of currency notes passed to the Central Bank and during the same month the Bank issued its first 10/- and £5 notes bearing the same design as the ‘Pictorial’ series. The £1 note in this series was issued on 24 September 1969 and these three notes were called the CBM 1st series. 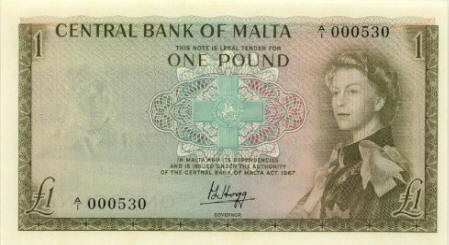 The Central Bank issued its second series, the CBM 2nd series, on 15 January 1973. The 10/- note was dropped (a 50c coin had been issued in May 1972 as part of the coin changeover to decimalisation) and a £M10 note was introduced. 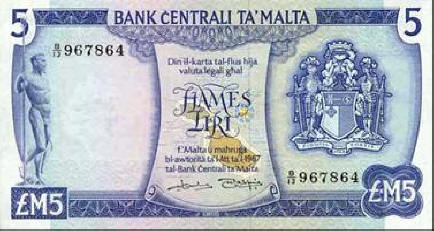 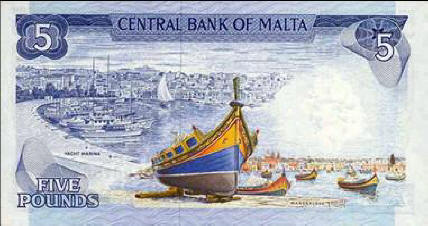 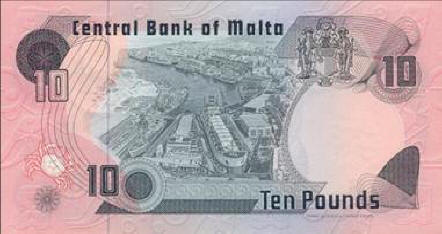 On 17 March 1986, the Central Bank issued a new set of four notes -namely Lm2, Lm5, Lm10, Lm20 called the CBM 4th series. This issue marked the appearance of the Lm20 and the Lm2 note. The Lm1 note was replaced in 1986 by a coin. For the first time the notes included a portrait of the President of the Republic as Head of State.

On 18 September 1989 the Bank issued a new set of currency notes, the fifth series. This coincided with the 25th anniversary of Malta’s Independence. These banknotes, which had the same denominations as those of the fourth series, were enhanced with security features in 1994.